And Now Your Smash Up AAAAAAALL-STAAAARS!

That's right, the best of the best of Smash Up have teamed up to be the best basketball team in all of outer space. Because that's their jam.

Still with us? OK great! This Smash Up All-Stars event kit contains many copies of the new faction "All-Stars" that you can give out at in-store events of Smash Up! Also includes upgraded power tokens and a super cool oversized playmat that'll make Smash Up stand out in your store.

This set is discontinued.

All Stars Event Kit was a special Smash Up set, only available for retailers. It contained 8 "Smash Up All Stars" faction packs (each containing a copy of the Smash Up All Stars faction, 2 bases and a divider), a table-sized Smash Up playmat, a set of wooden VP tokens and a drawstring bag.

While AEG has no plans to sell the playmat, wooden tokens and drawstring bag, the Smash Up All Stars faction is available in The Bigger Geekier Box.

Combined with all previous sets, there are 51 factions and 102 bases, which make 1275 possible pairs of factions.

It was also bundled with two copies of the Core Set, allowing stores to hold Smash Up events for up to eight players per each purchased kit. 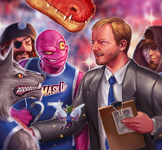 Smash Up All Stars