Are we turning Japanese?

We really think so...

Smash Up is back after a vacation in the Far East, and it brought all new factions like you've never seen before! Unless you, like, watch TV or movies or read comics or something. But who does that?

The Kaiju storm onto the scene and show you why we call the set Big in Japan. Magical Girls use their spells and the power of teamwork to win the base. The mighty Mega Troopers defeat any foe with their martial arts skills... and giant flippin' robot. And finally, because we had to have them all, the Itty Critters will defeat any challengers, if you have the heart of the... wait, sorry, mixing references.

Big in Japan is the 12th Smash Up set (The All Stars Event Kit released before that is a promotional set and isn't considered by AEG as a regular set.) It contains 4 new factions, 8 new bases, a rulebook, VP tokens and 4 titans which also serve as dividers for The Big Geeky Box.

Combined with all previous sets, there are 55 factions and 110 bases, which make 1485 possible pairs of factions.

This set introduces factions with titans. 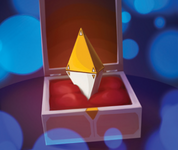 Itty Critters (based on Pokémon) 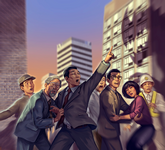 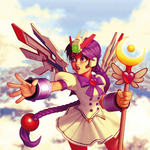 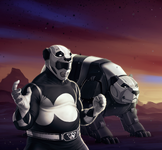 Mega Troopers (based on Power Rangers)

This set made a few modifications to the rules relative to the previous rulebook in What Were We Thinking?: