View source
watch 01:36
We're Getting Mutants in the MCU - The Loop
Do you like this video?
Play Sound

These booster style packs each contain one entire set of the Penguins faction, including a divider for use in the Bigger Geekier Box. The Penguins bring all-new strategies to Smash Up that the players will want to try out! Every player who attends should receive a pack. If you have more than 8 attendees, give them to the top 8.

Smash Up Penguins is a single-faction Smash Up pack that was supposed to be first released as part of the World Tour Event Kit and is currently available on AEG's online store. It contains the Penguins faction, 2 bases and a divider.

Combined with all previous sets, there are 69 factions and 138 bases, which make 2346 possible pairs of factions. 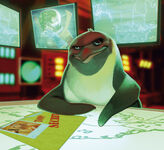 While no insert was sent along with the Penguins faction, an insert is available online.

The insert contained clarifications for a few of the Penguins cards and made a few modifications to the rules relative to the previous rulebook in World Tour: International Incident: