Congratulations! As a reward for answering our Smash Up survey, we present you with this new faction: Sheep! Don’t believe their bad rap: Following others around and copying their actions is really pretty powerful!

Smash Up Sheep Promo is a promotional Smash Up set, first only obtainable from completing the 2017 Smash Up survey and joining the Smash Club, and currently available on AEG's online store. It contains the Sheep faction, 2 bases and a divider.

Combined with all previous sets, there are 56 factions and 112 bases, which make 1540 possible pairs of factions. 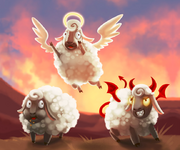 While no insert was sent along with the Sheep faction, an insert is available online.

The insert only contained clarifications for several of the Sheep cards.