My What a Smashing Box...

Smash Up has grown up! After many expansions we heard the cries of the masses who sought a better way for holding Smash Up cards and we have answered with the Smash Up: The Big Geeky Box! Not only are we giving you a box that will hold all of your current cards, it will hold many expansions to come, and we even include dividers for all the decks as well as those spiffy foam bricks that will keep your cards steady.

This set is discontinued. It has since been replaced by The Bigger Geekier Box that provides the same contents, but with more space and extra stuff.

The Big Geeky Box was the 5th Smash Up set. It contained 1 new faction and 2 new bases.

Combined with all previous sets, there are 21 factions and 42 bases, which make 210 possible pairs of factions.

Since the box of the original Core Set could only accommodate the first 3 sets (up through The Obligatory Cthulhu Set), the Big Geeky Box was designed to accommodate all the existing sets thus far with much more space for future expansions. The box had three long troughs that could hold dozens of decks each. The set also came with dividers that named every faction made thus far and for Monster Smash which was released later (and dividers for Bases and Madness decks). To accommodate partly full troughs, the box also came with 6 foam inserts that could be positioned anywhere along the troughs and would remain in place. 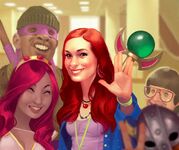 In other languages Edit

Retrieved from "https://smashup.fandom.com/wiki/The_Big_Geeky_Box?oldid=14664"
Community content is available under CC-BY-SA unless otherwise noted.